Janell Smith interviews graduate student Felicia Arriaga in an effort to understand issues of diversity within higher education institutions, specifically as it relates to Latino faculty members. With the hope of becoming a professor, Arriaga is a graduate student in the sociology department at Duke University, where she began her undergraduate career as a student in 2008 and received her bachelor’s degree in sociology and psychology in 2012. She is expected to graduate with her doctorate in 2018. She explains how her minority status has helped and hindered her collegiate career. Arriaga is a resident of Hendersonville, North Carolina, and is also heavily involved in and committed to her community. As the daughter of farmworkers, Arriaga works to better the lives of Latino students and laborers. She works for the Student Action with Farmworkers non-profit organization that seeks fair and just working conditions for farmworkers. Together Ms. Arriaga’s passion for education and her experiences as a Latina student provide a valuable perspective on diversity in higher education, especially as it relates to inclusion of Latinos.
R0703_Audio.mp3

No restrictions. Open to research. 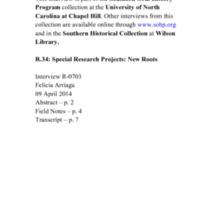