Ana Laura Medrano was born in Chihuahua, Mexico and moved to Washington, North Carolina when she was eleven years old. Her father was a U.S. resident and traveled frequently between Texas and Mexico. Medrano and her mother received travel visas through her father's company. Medrano attended high school in the U.S. and enrolled at Beaufort Community College before transferring to the University of North Carolina at Chapel Hill. This interview begins with an overview of the Medrano family and their reasons for moving to the United States. Medrano discusses the difficulties she faced integrating into the United States, but suggests her experience was much easier than the path for undocumented immigrants. Medrano also talks about her work with the Latino community in the Chapel Hill-Carrboro area.
R0473_Audio.mp3

No restrictions. Open to research. 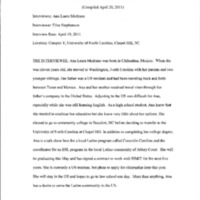